On the big accomplishment of SabaFon football and chess teams in the championships of corporations, SabaFon CEO Honors Al-Aghbari and SabaFon teams

SabaFon CEO received SabaFon football team after their winning in the second rank in the third championship and Mrs. Jehan Al-Aghbari who won the bronze medal in chess championship in 12/Jan/2020.

SabaFon CEO, Eng. Abdulkhaleq Al-Ghaili, congratulated the players on their positive achievement and recognized their efforts along with the organizing and management teams for their exceptional performance and the winning that put SabaFon name in the lead.

Eng. Abdulkhaleq Al-Ghaili stressed SabaFon care and interest in the sponsorships and interests in sports and sportsmen in the different fields. He also stressed the importance of continuing such accomplishments and achievements to gain better results.

Al-Ghaili encouraged during the meeting that was attended by the Admin Director, Mr. Hafedh Al-Dailami, and the CFO, Mr. Ali Jahez along with a number of syndicate management teams, and the players on continuing training sessions and keeping up their fitness and earning sports skills from such competitions that reflect on their sports performance in years to come to achieve more positive results.

The players and the management and technical teams were honored as well as the best player in the championship, Mr. Jamal Al-Montaser, who received monetary prizes for their efforts that they extend in this competition. The football team couch, Mr. Suhail Al-Azazi, expressed his gratitude to SabaFon management board for their care and interest in sports and sportsmen of the company, and attributed the achievement of the team to this care and interest.

Finally, the team members have expressed their happiness on this kind gesture from the higher management who have given them the moral incentive to exert more efforts and achieve more winnings in the championships to come. 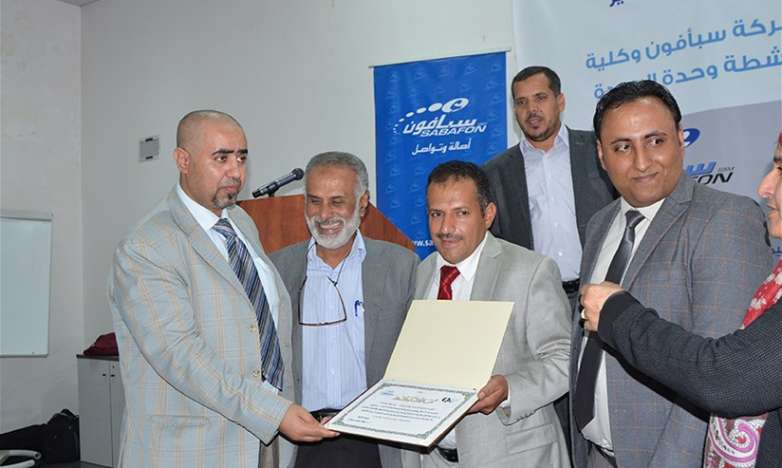